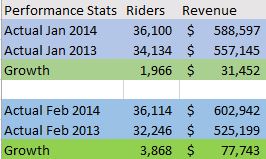 NNERPA Executive Director Patricia Quinn announced at today's monthly board meeting that Downeaster ridership had increased by a total of 5,834 riders during the first two months of 2014 as compared to the same period in 2013. Revenue demonstrated a similar jump, increasing by $109,195 over Jan/Feb of 2013.

Growth isn't easy in the middle of a New England winter, as people tend to stay home because of snow and numbing cold, but the Downeaster continues to hold on to its regular riders and attract new followers. Guess that's why it's been labeled "America's Favorite Train."

On Time Performance was 69.6% in January and 75% in February - still not something to write home about but heading in the right direction. March-to-date is showing on OTP of 87%.

The overall Customer Satisfaction Score for January of 2014 was 92% as compared to Amtrak's 85%.

Improving numbers continued to come in - a credit to the Amtrak crews and management, and of course, the passengers.