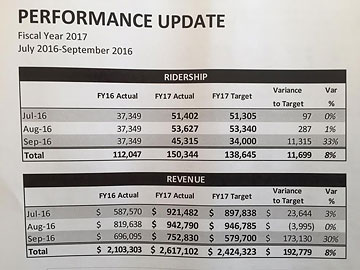 Ridership & Revenue: There isn't much commentary needed for the performance numbers released yesterday at NNEPRA's Board Meeting. Executive Director Patricia Quinn smiled as she reported that the first quarter of FY2017 set a 15-year record for Ridership and Revenue.

The ridership numbers reported this week have been updated due to an error. As you can see in the graphic, 37,349 was entered in all three 2016 months. The FY16 Actual numbers are:

Tie Replacement: Special Projects Manager Jim Russell reported that PanAm is progressing well in changing out some 15,000 ties between Portland and Wells - 7,000 done and 8,000 to go. Thirteen miles have already been done with 20 miles to go. Currently, the PanAm crew is between Old Orchard and Saco. Completion of the project is scheduled for November 18th.

Brunswick Layover Facility: The weekend open house was considered an overwhelming success with up 500 visitors showing up. NNEPRA staff was present to answer questions and put to rest unfounded rumors such as: heavy maintenance, welding and other noisy activities would be conducted in the "barn" - not true. One couple wondered about the reported use of the facility by the MBTA - not true. It's an example of how the opposition, through a gullible press, poisoned many minds with misleading statements. The staff was only too happy to set the record straight. 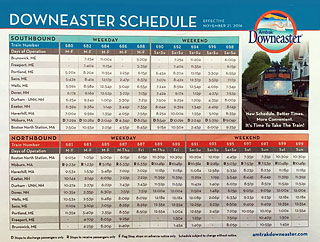 New Schedule: Two of the three trainsets will be housed in the BLF starting November 21st - no outdoor idling. This allows for a new, more flexible schedule. First, three roundtrips to Boston will start in Brunswick. Second, a significant shift in departure and arrival times will help riders make their time in Boston or Maine more productive (less wasted time). Check out the schedule.

The new timetable has a new plus for passengers arriving in Boston in the morning and completing their meetings/visits around noon. They won't have to wait all afternoon for the 5:00p train. They can hop on the new 1:05p northbound service. The 1:05p, 5:00p and 6:15p trains will terminate all terminate in Brunswick.

Brunswick Dedication Ceremony: NNEPRA will celebrate the expanded train service from Brunswick on November 21st at 10:00a at the Brunswick Station. Sen. Angus King, who as governor was on the inaugural run in 2001, will be the honored guest along with David Fink of PanAm Railways. The public is invited.

Food Service: NNEPRA, after competitive bids and discussions with various vendors, has selected a new company to service the Cafe Car. Ms. Quinn emphasized that Epicurian had performed well but the new company, NexDine, had new ideas NNEPRA wants to implement. NexDine will interview current staffers for possible positions in the Cafe. This ends a 15-year relationship with Epicurian Feast as Cafe Car food provider.