Amtrak Ink, a monthly publication for and about Amtrak employees and the national train service's economic impact along its routes, allotted a lot of 'ink' to the Downeaster in their January and February editions.

In January, Saco, Wells and Portland scored in the top 20 stations with the highest eCSI (electronic Customer Satisfaction Index) Go here for the graphic. 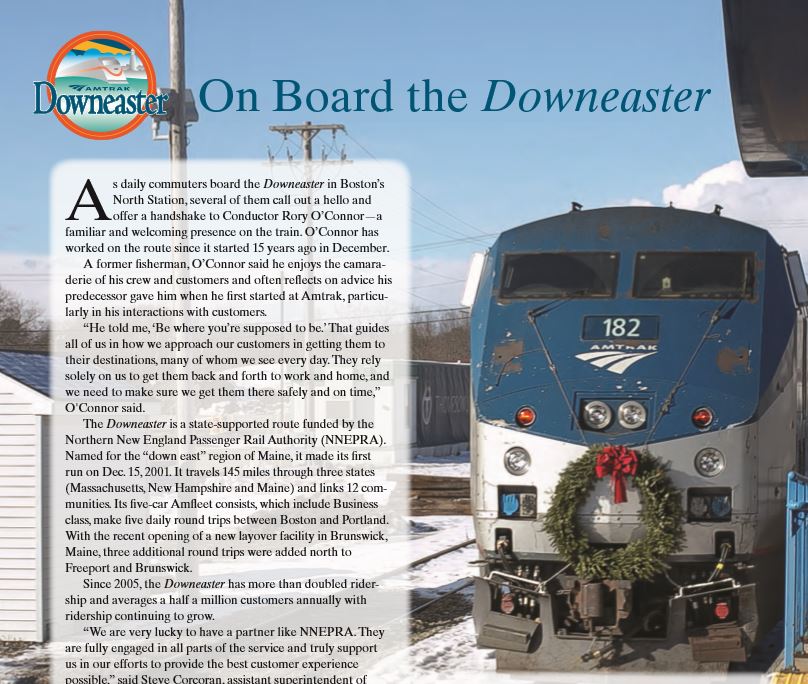 The February edition had two impressive articles - "Employees On the Downeaster" and "Economic Impact of the Downeaster." It is good to see our crews get the national attention they deserve.

In the economic development story,  Saco City Administrator Kevin Sutherland is featured celebrating the conversion of a previously abandoned mill building into 150 apartments directly across the street from the Saco station. Occupancy will begin in May. In Portland, Chris Thompson of Thompson's Point Development speaks of his revitalization of land adjacent to the Portland station. Steve Pesci of the University of New Hampshire testifies to the value of having a Downeaster stop right on campus and Steve Corcoran, Assistant Superintendent of Downeaster Operations,  brings readers up-to-date on the successful Brunswick Layover Facility.

Amtrak also produced a video for their Great American Stations publication, some of which was shot during a snow storm. Go here.

We've always had pride in our Downeaster service, but now the nation can read about "America's Favorite Train."