The NNEPRA Annual Meeting was filled with the sweet smell of success. 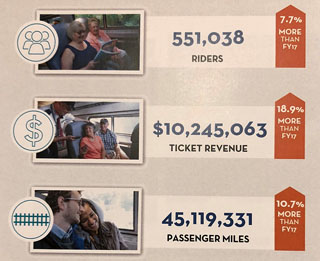 The Downeaster maintained one of the highest customer satisfaction ratings in the country in FY18 at 90%.

The Downeaster has transported more than 7.1 million passengers and generated more than $107 million in passenger revenue since the service began on December 14th in 2001.

Executive Director Patricia Quinn announced that after discussions with PanAm, the fifth round-trip to Boston will now originate in Brunswick starting November 12th.