The 28th Annual Meeting of TrainRiders/Northeast welcomed 100 attendees at the Clarion Hotel in Portland (next to the Transportation Center). Many of those came by train, so it was a quick walk from the station to the hotel.

Senator Angus King saluted the Downeaster and TrainRiders/NE in a video presentation, complementing Wayne Davis for his vision and passion. Watch his comments here.

Eugene Skoropowski, Sr VP of Operations for All Aboard Florida's "Brightline", was the guest speaker. Gene's expertise is putting Florida on the map as a passenger-train-friendly state. He gave an impressive PowerPoint presentation, the slides of which can be viewed here.

Patricia Quinn did her most enjoyable 'number's bit', detailing the growth of the Downeaster Service from the Inaugural run some 15 years ago to the present. This comment is from board member Robert Hall of Exeter:

Trainriders/Northeast had a great luncheon in Portland and then off to Freeport we went to see the LL Bean Christmas Light display which is called Northern Lights.

A full day, a fun day and a great day for the Downeaster.

Take the train it is worth the time and money!

David Fink spoke to the members telling some 'behind the scenes' stories about his relationship with NNEPRA (all in good humor). He was particularly complimentary of Patricia Quinn's leadership over the years and expressed stern condemnation of those who continually denounce her efforts and that of her staff.

Bill Lord presented his latest video which tracked the empty freight yard where the Layover Facility was to be built through construction, tours, crew qualification, Government Oversight Committee hearing and finally the inauguration of the third roundtrip to Boston from Brunswick. 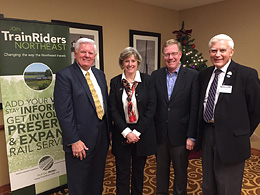 The four smiling faces in the photograph (Eugene Skoropowski, Patricia Quinn, David Fink and Wayne Davis) reflect the unanimity of opinion about the Downeaster's success and growth.

In 1989, a group of 21 citizens got together to talk about a return of passengers rail in Maine. The effort led to the creation of the grassroots organization of TrainRiders/Northeast.

The group, which included interested parties from throughout the state and several from New Hampshire, explored the feasibility of Amtrak extending the Northeast Corridor passenger trains from Boston through New Hampshire to Portland. That was our first step. We felt then, as we do now, that implementation of passenger rail should be undertaken on a regional and multi-state basis.

Won't you join our organization? There is much to do as we continue to work with the DOT and NNEPRA  - from examing future routes to maintaining and improving the current service. Our future is in your hands. Go here to join.