On March 25th at 2 p.m., our 33rd Annual Meeting was called to order. It was not in a hotel ballroom but on the Internet as a Zoom Webinar.

You heard from Chairman Wayne Davis and former Vice-Chair Andy Hyland about our new proposal for a simplified trip from any Downeaster station to New York City's revitalized Penn Station (Moynihan Train Hall). At North Station, you would cross the platform to an awaiting Amtrak southbound train, thus eliminating the frequently challenging and time-consuming subway commute to South Station or the costly taxi ride. Of course, the trip to Maine, New Hampshire & Massachusetts from the Big Apple would be equally accommodating.

You also heard from our guest presenters and were able to ask them questions thanks to Bruce Sleeper's tireless monitoring of the chat channel. 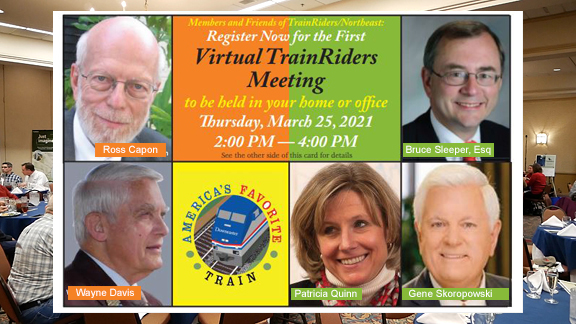 The video of the Webinar has been split into two sections for easier viewing.

Section 2 details our New England States proposal, eliminating the frequently awkward journey between North and South Stations for those wishing to continue on to New York City. You'll hear assessments of the proposal from town and station leaders and then join Wayne Davis for an in-person tour of the new Moynihan Train Hall in NYC. Go here.